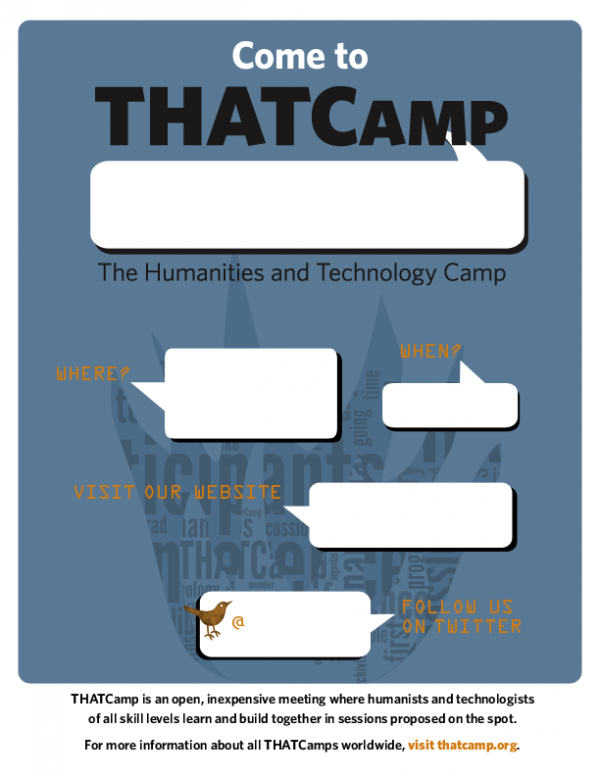 The best ways to publicize your THATCamp in order to recruit participants: email, web forums, Twitter and other social media, fliers, and by keeping THATCamp Central apprised of your plans.

There’s an infinite amount of publicity you can do for a THATCamp. If you have willing helpers, put them on publicity duty — draft an e-mail announcement (see a template for a typical THATCamp announcement here) with the link to the registration form and ask your helpers to e-mail it to people, organizations, and departments who might be interested. They can do likewise for topic-focused forums and listservs. Be sure that your announcement carries a notice such as “Please distribute widely” so that others are encouraged to spread it around.

The #thatcamp hashtag gets lots of traffic and is regularly perused by THATCamp junkies, so if you make sure to have a Twitter account and use the hashtag #thatcamp, the word will be sure to get out. The @thatcamp account also regularly retweets tweets from THATCamp accounts.

Not everyone uses Twitter, of course. Try posting announcements about your THATCamp on the following sites:

Fliers – Don’t forget to advertise locally. Chris Raymond, our designer, has thoughtfully created a set of THATCamp flier templates (.zip) at thatcamp.org/docs/thatcamp-fliers.zip in .docx and .tif format that you can customize and post around campus or around town. The blue version is depicted above.
THATCamp Setup – Make sure that the location and date information in THATCamp Setup settings in the administrative Dashboard of your THATCamp website is correct. This will keep the information on the home page of thatcamp.org and in the THATCamp Directory correct