Video of the full dork short session at THATCamp CHNM 2011.

Dork shorts, known in some corners as “lightning talks,” are brief (2-minute or 3-minute) presentations in which attendees discuss current or upcoming projects, demonstrate new tools, or call for collaborators. Like most of THATCamp, Dork Shorts are meant to be as informal as possible. Although the concept might be unfamiliar to new THATCampers, veterans think it’s one of the most fun and useful parts of each meeting: Dork Shorts let you learn a lot in a little bit of time.

Scheduling a time for Dork Shorts

Some THATCamps have held their dork shorts sessions during a lunch break (if you’re providing lunch). Other THATCamps have held Dork Shorts during the very first session — that way, participants can give short presentations while a couple of other people are off creating a THATCamp schedule for the rest of the event. Sometimes dork shorts take place in the last session of the last day of the meeting. Whatever you decide, allow at least 40-60 minutes for this session. That translates to about 15-30 “talks” of 2 or 3 minutes each.

Consider creating a preliminary list of committed Dork Short presenters before the session begins. You could, like THATCamp New England 2012, ask attendees to comment on a blog post in order to create an informal list of presenters. Or, create a Google Doc spreadsheet to collect presenters’ names and the URLs they want to use in their presentations, and then embed a form into a blog post, like THATCamp Bay Area did. Make sure you tell people beforehand where they can sign up to give a Dork Short, and remind them periodically.

Depending on your philosophy, you might want to discourage the use of PowerPoint even for pre-planned Dork Shorts. In most cases, presenters can just navigate to the URL of their project, and take the audience through some of its features. Whether presenters are using slides or a URL, you should have the visual aids loaded before beginning the shorts. If you’ve collected URLs beforehand, using a blog post or a spreadsheet, you can open them all in a series of browser tabs before the shorts begin, so that people can move right through their presentations without hitches.

Allow for a cushion of time at the beginning of the session for last-minute signers-up to load their URLs, and for people using PowerPoints to transfer them onto the presentation computer.

Many organizers don’t ask for presenters for Dork Shorts beforehand at all: they just allot a time for Dork Shorts, set up a whiteboard or piece of paper, then explain what Dork Shorts are and ask people to sign up — just like an open mic. 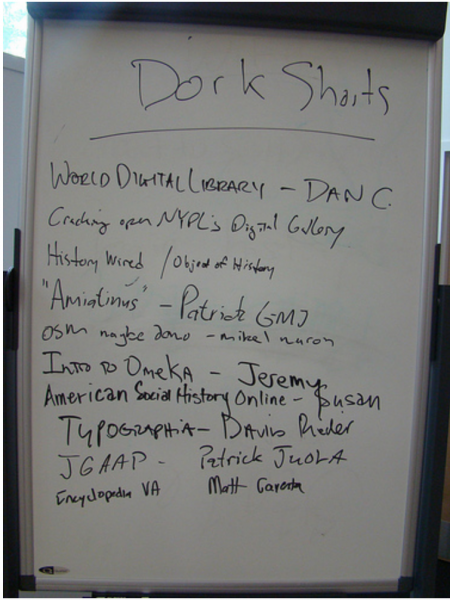 Even if you have a good list of committed presenters, you should also encourage last-minute joiners. People often don’t realize until they see the session in action that the project they’re working on would be an appropriate subject for a dork short.

Time is of the essence. Keeping dork shorts to either two or three minutes in length allows more people to present, and promotes the kind of informality that you want to encourage. To that end, somebody should keep time and act as enforcer. Some THATCamps have used a noisemaker (a bell, the buzzer from a game of Taboo, a kazoo, an iPad or iPhone timer) to signal the end of each talk; this touch of ridiculousness keeps it light.